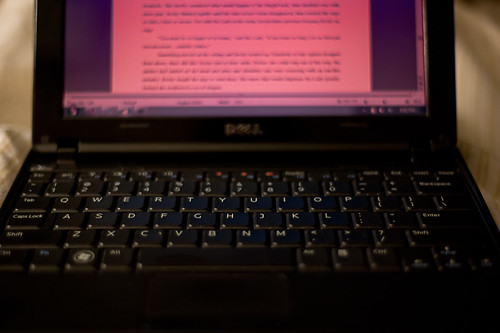 With my wife away at a conference all last week, I decided to put that time to good use and do an at-home writing retreat. I detailed my prep in that post, then went silent for a week. Now that’s it officially over, I have both wins and fails to share.

First, the wins. Cleaning the apartment and getting a bunch of small but niggling projects out of the way was extremely helpful in keeping me on task later in the week. I was never tempted to scrub the bathroom, vacuum the floor, do the laundry, or put away clutter in lieu of writing because it was already done. This gave me both peace of mind and a lovely, clean house in which to lounge about and write, or invite friends over and write, or simply read on the floor.

It also left my HabitRPG wonderfully free of to-do’s, so when I checked in every day to log my dailies and writing, I wasn’t bogged down by a list of other things I should be – or felt I should be – doing.

Writing with friends wasn’t something I’d originally planned for, but it happened often and was wholly refreshing, especially after a long day by myself. Looking back, I’m glad I had all those social writing sessions, even if they weren’t the most productive blocks of time. They helped alleviate the overall loneliness that settles in when my wife is away. I also had a few late nights where we didn’t write, but did talk craft, which for writers is like crack.

With the intention to write as much as possible or read when I didn’t feel like writing firmly in the forefront of my mind, it was much easier to turn away from the internet once I had checked my email and researched a few things via google. It was much easier to come home, change out of my work clothes, and settle onto the couch with a book. My job was to write that week, and write I did.

As for the fails…

There weren’t any large ones, just small things that could be adjusted or outright fixed for next time. Because there will be a next time.

The major fail? Not planning well for meals. I made enough for my breakfasts and lunches for the week, but my dinners were kind of on the fly and less than optimal. I may have had cheese and crackers on more than a handful of occasions. Next time I would prepare more food, especially a few treats, like maybe a pizza (with pumpkin sauce), or large and fantastic salads. Not having fulfilling and tasty things immediately on hand to eat led to countless minutes whining about food to the cats while staring into the fridge.

The other fail I had foreseen in advance and might partially couch as a win. My intention had been to avoid internet altogether outside of work, but in practice I did check my email, update HabitRPG, and occasionally get lost on twitter. If this were a pass/fail, I’d definitely have failed. But I think I deserve a C+ for effort. I limited my normal interneting by a great amount and, although I caved and checked my email, I still turned it off after a reasonable amount of time and got back to work.

All in all, though, the numbers don’t lie. I should have written down my starting wordcount, but at least from last Monday and over the course of the following week, I wrote a total of 15,000 words. To put that in context, on an average day I write about 1,000 words, so overall that amount reflects more than double my usual output. I’d say pretty good, considering I was still working full time. And on the days off from work – Friday and Saturday – I wrote more than 3,000 words a day.

What I took from the experience is mostly a greater understanding of my own limitations. As far as writers go, I’ve always known I’m not one of the more prolific ones, but it was something else to have a full day in which to write and only be able to churn out 3k. Granted, this is a first draft and a lot of planning and plotting are still going on, but it was still humbling. Just because I want to write 10k in a weekend, doesn’t mean it’s either feasible or plausible – at least for me.

I’d definitely do an at-home writing retreat again, taking into account my above fails. I would love to actually unplug my home internet for a whole day and see how that affects my productivity. In fact, I’m already looking at my calendar and trying to carve out another week or long weekend in the future. What with my self-imposed deadline of September for this WIP, I’ll take anything I can get.

What about you – would you be interested in doing an at-home retreat of your own?

2 thoughts on “My At-Home Writing Retreat”